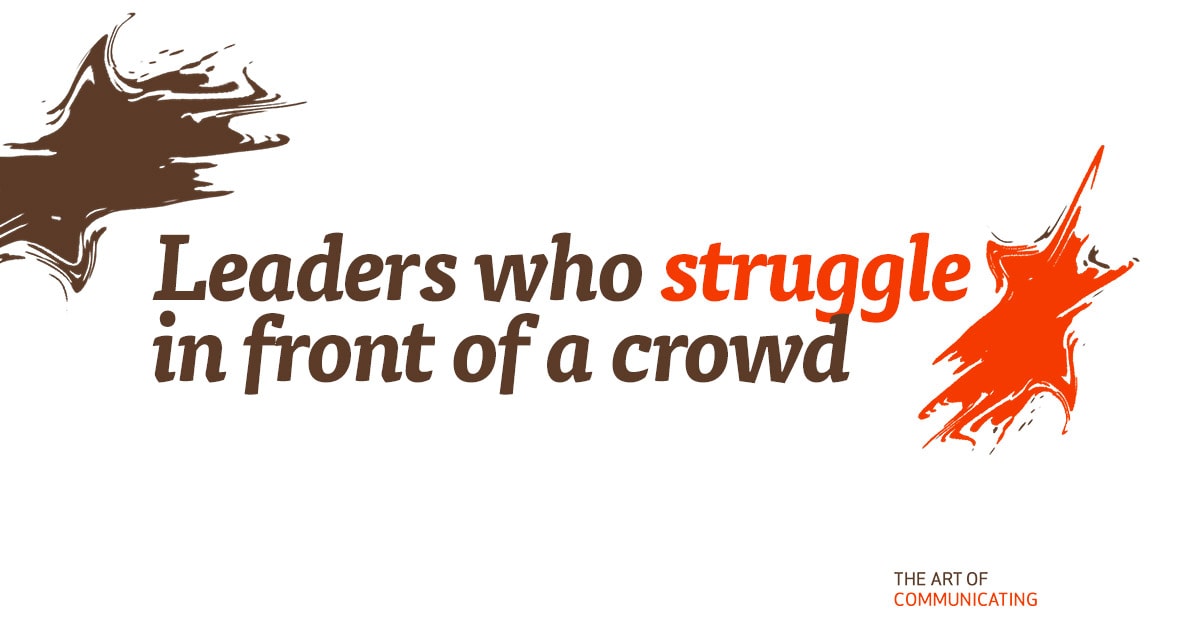 Leaders who struggle in front of a crowd

Why is it that some leaders who are brilliant, passionate communicators in 1:1 settings become stiff and monotonous when speaking to audiences? It’s not that they are shy or anything. They are not. They also don’t have a problem to be exposed on a stage. It’s part of the job description and they will just do what’s required. Yet, it’s obvious how they don’t enjoy it. They prefer more intimate settings a great deal.

So why is it that they are not as brilliant on stage as they are in 1:1? A major cause is that they don’t feel comfortable with the story that has been prepared for them, e.g. by the marketing department or by some assistant. It’s not that the story isn’t great. But somehow it doesn’t feel right. It’s not how they would speak. It’s not how humans speak. It’s how companies speak.

Therefore, it doesn’t feel natural to them. They don’t trust that it will resonate.

There’s no doubt that they do believe it to be true. But they don’t trust in the way they tell it. It’s not how they normally talk. It’s not how they speak in a conversation. And so, it doesn’t really resonate with them themselves. Therefore, they lack that last bit of confidence that turns a good speech into a great one.

In 1:1 or a closed circle, where these leaders can interact or where they clearly have the lead, it feels totally different for them. They just say what they believe in. They are not “on record”.

And that makes a big difference. In front of a crowd, their speaking is scripted. And it is scripted in a way that doesn’t feel true to themselves. It’s not who they are and how they normally speak.

It feels a little awkward.

One of the things that distinguishes masterful communicators from mediocre ones is that the latter have found a voice that is true to themselves, even when speaking to crowds of people. Even then, they are speaking from their heart saying words they believe in, in a way they believe in. And with this comes confidence, the confidence that’s required to move an audience.

So, the next time you’re about to enter a stage, ask yourself: is this how I would say it?

Great salespeople show us a better future. They make us see that there’s a gap between what we have got now and what we could

This is usually easy: to make sure that the information in a presentation is correct. That there are no mistakes in the data. That it’s

All eyes are on you

“So, what shall we do about it?”, Martin asks. Suddenly, all eyes are on you. It’s a crucial phase of the project. The team is