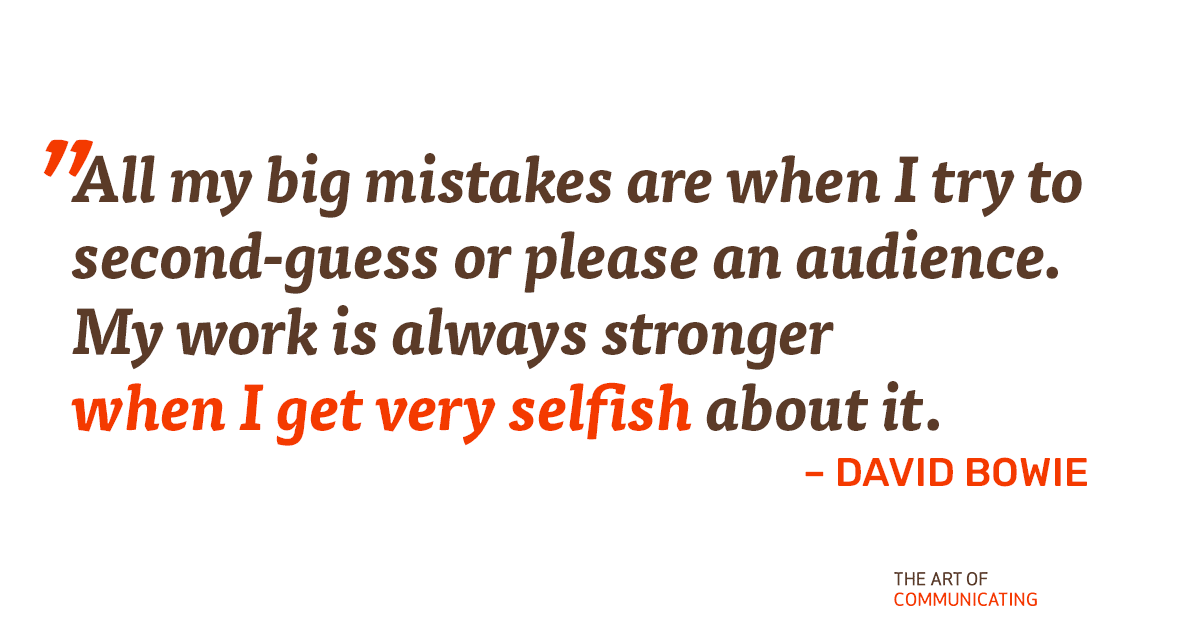 How not to please your audience

When you’re an artist, it makes little sense to try to please your audience. At least not if you take your art seriously.

If an artist were to base his work on what their audience would like to see or hear from them, they would inevitably have to limit themselves to what they have already produced. Simply because the public cannot know what it would like. They only know what they do already like. If you asked them, they’d almost certainly tell you: “More of that, please!” And that’s what you would need to do.

If you strive to please the audience, you’re shooting too low. You are being too cautious.

Which keeps you from breaking new ground. Because, well, what if they don’t like it?

The problem is that no audience in this world can guess what kind of art they haven’t seen from you.

Your audience understands not nearly as much about your art as you do. They don’t know what art hasn’t been made by you, yet. And they certainly can’t imagine how it looks like beyond the boundaries of what you’ve done before.

So, what’s left is to trust your own judgement.

That’s what Bowie was referring to when he called himself “selfish” about his work. Rather than his audience, he trusted his own judgement to lead him to places where others would like to follow. Just like Miles Davis and Eddie van Halen did. They pioneered uncharted territory and then lighted the path for others to follow.

The same is true for any creative – developers, designers, and engineers, and more …

And yet, I think that companies are actually the opposite of selfish when they take Bowie’s stance. Products exist as solutions to a problem. No customer understands the problem that you’re solving nearly as well as the makers of these products.

And so, we need to trust our own judgement when it comes to finding the best solution to that problem. We must not stop at the most pleasing solution, but continue to strive for the best solution.

That might not always be what our audiences expected. Sometimes, it might not even please them. But it’s the right thing to do. And if it’s actually great, eventually, it will not only be right but, of course, also please them.

What are you building on uncharted territory? How do you light the path for your audience?

Today marks the end of Angela Merkel’s period as Germany’s chancellor. Three attitudes she brought to the office: Keep calm.Be respectful.Listen. Put together, these three

How to decide what to leave out

If you’re anything like me you could probably speak for days about your topic without you getting bored. Most likely, your audience won’t grant you

Each year, more than 8 million children die due to poverty (source). That’s a huge number. But how large is it, really? The human mind