What? You don’t enjoy public speaking?

“What do you mean you don’t enjoy public speaking?”
My friend was surprised to learn that his peers had perceived him as a fantastic public speaker. When he shared that he actually didn’t like being on a stage, they were – in turn – baffled to learn that.

How can someone who’s so good at speaking not like it? Worse: How can he be better than some of them who love the stage?

Actually, I encounter this mismatch quite frequently. Often, the best speakers turn out to be the very people who don’t seek out the spotlight.

Which is part of the reason why we find their speeches so enjoyable.

They don’t show up to show off. They show up because they care for their cause. Which gives their speeches a very different angle.

They don’t seek applause, but change. They are not looking to wow us, but to lead us to a profound aha moment.

They merely try to help us see what they see. And because they care deeply, they will not settle with confusing language, but look for crystal clear language that makes the complex feel simple.

To them, standing on a stage and giving public talks is an essential part of caring for their cause.

They may not enjoy the stage.
But they enjoy making change happen.

Is your own idea clear to you?

Here’s a simple test: If you can’t articulate it clearly, it’s not clear.

If you want clarity, articulate your idea. Then refine what you said (or wrote down) and don’t stop refining until it’s clear.

If the people on your team clearly see

and if your actions suggest that you mean it (as opposed to just throwing some random motivational bullsh#t at them), it’s likely that the right people will be attracted and the wrong people will leave.

The biggest win here is that you can trust the people who do follow along with knowing how to walk the path. They want to take that path.

Which means they will figure it out. You can stop micromanaging and focus on lighting the path.

What’s your answer to the three questions?

“How long?”, she asks the doctor.
Immediately, we’re right in the middle of a story.

Which is typical for modern movies. It’s one of the aspects in which storytelling in movies has changed significantly over the past few decades.

The average early 90s movie is hard to bear for many teenagers because they started soooo sloooowww. Part of the reason was that filmmakers back then felt the need to start as early as possible so we would have the back story to understand what was going to happen later.

Today’s movies (and TV shows) are very different. They will start as late as possible, ideally right in the middle of the action … at the most captivating event.

This makes for a much more tense story.

Actually, today’s most brilliant filmmakers push that principle even further. They will make sure that we want a piece of information, before they finally give it to us. They make us curious for the backstory.

In contrast, yesterday’s filmmakers considered backstory as pure information. Often, they would give us the information before we wanted it, just to make sure that we had it when we needed it.

How about your own communication? How do you treat background information? Are you starting your presentation with it? If so, can you re-structure your storytelling in a way that you’re giving the backstory at a point when your audience is dying to learn it?

Secure the only spot at the airport that sells water and you can basically stop bothering about how you do business. It doesn’t really matter how good or bad your service is or how clear or confusing your communication is, business is almost unavoidable.

For everyone else, clarity in your communication (what can people expect) and providing great service (delivering on what they expect) turns out to be invaluable.

Which book didn’t you write but could have?
Which speech didn’t you give but should have?
What’s the blog that doesn’t exist although you could write it?

What’s holding you back?

You might copywrite a text faster than anyone else in town. But on the other side of the planet, I can find someone who writes better.

You might make the best burger in New York. But if I’m living in Germany, I will choose a different restaurant for tonight’s meal.

“Faster” and “better” can have a very different value depending on the arena you’re competing in.

Which arena are you competing in? Does it influence how you communicate why people should choose you?

What else could work?

“One of the biggest strategic mistakes you can make is to fail to make the most of your victories. Yet even brilliant leaders sometimes make this mistake. One reason they fail is if they are obsessively searching for the Next Big Thing.

What’s not to like about the Next Big Thing, right? I mean, wouldn’t you just love to launch one?

One of the misconceptions about Big Things is that they would just appear and immediately take over the world.

That’s hardly how it works in real life. The iPhone was a niche product when it launched. Facebook was only available at a single university when it launched. Tesla (which is yet to become an actual Big Thing) launched with an expensive niche sports car.

Instead of asking what else could work, it might pay to regularly ask what’s already working and then amplify that.

(And, of course, there’s a smart distinction to be made between consistency and stagnation.)

When you decorate a diamond you make it less beautiful, not more. Diamonds need to be polished.

Does your product need decoration or polish?

Average blends in.
Edgy stands out.

For example, there’s this super weird fashion store that draws an ever growing crowd of loyal superfans.

It’s no wonder that imitators started to spread who tried to copy the edginess.

The imitators copied the look but lacked the understanding of the specific needs of the customers. The edgy look was a consequence of being specific. The fact that it felt kind of weird was much more a coincidence than a choice.

Being specific almost inevitably leads you to become edgy.

Specific can be weird, but more often than not it isn’t. Weird is just one way of being edgy.

Can you be more specific about who you serve? And what they need? 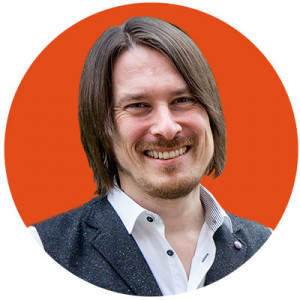 Yes, I love talking to you. Call me at +49.2241.8997777
Or reach out at michael@michaelgerharz.com
Twitter
Facebook
LinkedIn
Email